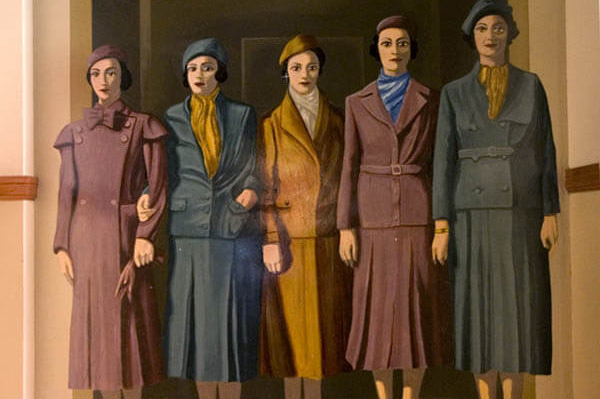 It has been weeks now since Lyle Hehn passed Away. It’s still hard to say “died.” He was not only a dear friend, but an incredible and foundational creator of the Mcmenamins look. What I guess your would call the visual brand of Mcmenamins.

When I first met Lyle, he had already been very active for Mcmenamins, painting in the wine bar of Edgefield’s basement, various pubs, and the Power Station, also at Edgefield, and undoubtedly much much more. He was a master of very strong visual images that translated beautifully into almost any print application, T-shirts, labels for beer, wine and spirits, posters, maps. He was a superb painter, often with complex narratives and puzzles fitted neatly into a complete, organized whole, of excellent artistry.

And he pulled these off with the skills of a master. He created innumerable stand alone characters who live on, Hammerhead, Ruby, the iconic sun image, and so much more. He really set a bar for all of us artists who subsequently worked for Mcmenamins. He prepped surfaces with care and was always researching proper materials for priming, painting and varnishing. And the paintings he did were always very carefully finished. There were no loose ends, no rough edges. Everything was wrapped up nicely, thank you. This attention to detail and finishing became an established Mcmenamin style. We took the craft of our work very seriously. The visual language and finishing details he created were at the very heart of the Mcmenamins aesthetic.

He was also very helpful to new artists, such as myself, sharing information, and physically pitching in when there was some heavy lifting to do. .He helped create the atmosphere of helpfulness and mutual assistance that developed among the artists. We worked together primarily on new sites, like the Crystal Ballroom, The Jail at Edgefield, new hotels, and pubs.

Often in the pubs we would start work around midnight, listening to late night radio, like Love Line. Which made for great discussions at break time. We used to joke that Lyle would arrive at a site, and build himself a little house complete with a collapsible rocking chair, a coffee maker, boxes of supplies and a table. He had a sharp, rare, and dark sense of humor, which I loved. He was pivotal in creating a site for artists where you could easily ask help from other artists and get solid, quality feedback, which is invaluable for developing quality and skill. What a rare treat that is for most of us artists who are accustomed to working alone in a studio.

He was a devoted husband, with a deep love for Carrie, his wife, as well as his three daughters and two grandsons, who were a source of love, joy and pride for him. He once told me that he had wanted to be a dad from a very early age.

And finally, I miss talking with Lyle. We differed significantly in our overall world view. We both embraced the mystery of the universe, but for me it is a spiritual edifice, for him I actually don’t know, but I am sure he thought of me as hopelessly woo-woo. But what wonderful, long and thoughtful dialogues we had. He had that great sense of humor, and unique, thoughtful ways to look at this life. How much I miss being able to pick up the phone and going deep into talk with Lyle.

Jenny has just posted a beautiful tribute to her friend and colleague, Lyle Hehn in a new blog post on her website. Read it here:

Dear Jenny, We have enjoyed your artwork at Mcminamin's Edgefield for twenty years. You are a very talented artist. Thank you all the pleasure you have given to us with your fabulous paintings. 🥰

Jenny has a new blog up now, "Finding Willem de Kooning." Check it out now at jennyjoyceart.com/2022/05/06/finding-willem-de-kooning/ ... See MoreSee Less

Jenny has a new blog up now, "Capturing Oregon's Magic." Check it out now at jennyjoyceart.com/2022/05/03/capturing-oregons-magic/ ... See MoreSee Less

When I use your link to go to the website, I get a screen that tells me I am locked out.

I am locked out😢

Jenny has a new blog up now, :Lightness and Darkness." Check it out at: jennyjoyceart.com/2022/04/19/lightness-and-darkness/ ... See MoreSee Less

I am sitting here eating a donut that looks just like the one in the middle of your artwork!

I love this piece Jenny!!

Jenny has a new blog up, "Visiting the Southwest." Check it now at jennyjoyceart.com/2022/04/09/visiting-the-southwest/. ... See MoreSee Less